If you read my earlier post about my first dog Gracie, you know that I am absolutely in love with my pup. She is such an amazing dog. The only problem we had was separation anxiety (on both our parts).  She was (is) super clingy to me. If we would leave you could hear her through the door crying.

So at this point in our lives, we had one dog and two cats which my hubby thought was more than enough. I didn’t.

I knew Gracie needed a friend. I also knew this time I didn’t want to go through a breeder. I wanted to rescue a dog that needed a home, so I looked on petfinder.com. It’s a great site. You can type in what breed you want, what gender, what age and how far you’re willing to travel to find one.

Being allergic to dogs I have to have a hypoallergenic breed which limits things. I liked bichons and thought they were beautiful, so I found a rescue in Kansas City who had a litter of bichon puppies. I (kind of) discussed it with the hubby and he needed some convincing, but he didn’t say a flat out no — so I filled out the forms and emailed it in to see if we qualified.

A woman from the rescue called me the next day saying this litter came from a puppy mill and would be ready to go by the weekend. GREAT! Only problem was you had to commit to the dog, sight unseen. Well, what if we got up there and didn’t bond with the dog? What if she hated me? Then what? My husband would kill me if we drove 3 hours to get this dog, and we didn’t even want it.

The rescue was bringing several animals to a Petsmart that weekend to try to get them adopted and said we could pick up our pup there.

Here was my plan, we could go in and just act like we were random people, look at the dog and if we didn’t want it we would just walk back out.

Once inside, we saw the little munchkin. She was so tiny! We asked to hold her and she was so still and quiet and just snuggled up in my arms. At that point we told the woman who we were and that we wanted her.

Now bichons are usually white little fluff balls, but at the puppy mill they just had dog cages stacked on top of each other, and one dogs waste would just leak down to the cages below (sorry, not a pretty visual). So when they found all the dogs there they were literally yellow, so they had to shave them all down.  So she wasn’t quite as fluffy as I expected but that was fine it would grow back.

We put her in the kennel we brought and headed back home. The whole 3 hours in the car there was not one peep from this puppy. I kept looking in the kennel to make sure she was still breathing. She was terrified. 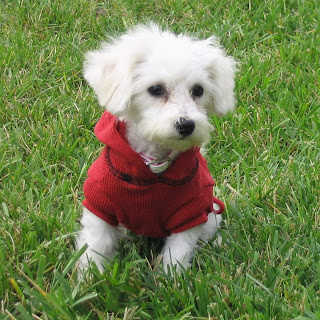 It turns out, for the first 3 months of her life she never stepped foot outside her cage. That is the crucial time where puppies learn to bond with people and their litter mates. She did neither. So when we got her home she crawled straight under the couch. It took so much coaxing to get her to come out. If my husband came near her, back under she would go. It was really hard for him. Once they had rescued Lulu (which is her name) from the mill they put her right in a foster home. The only problem was that the foster home had 4 small children that were constantly chasing her and pulling on her. So going from zero interaction with people, to the other extreme, she sort of had a nervous breakdown. We have had Lulu for 5 years now. It took 2 years before she would come on her own and sit in my husband’s lap. Even now if we move too quickly around her, she will dive for cover. If anyone other than my mom comes to visit, she will race back under  the couch. It makes me sad that her terrible beginning in life will affect her forever. I think for the most part she is a very happy dog. She loves us, and she follows Gracie everywhere. 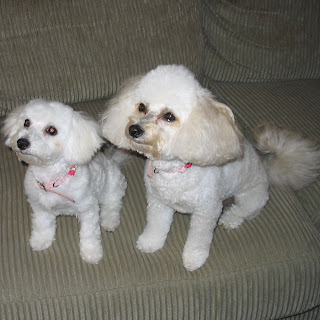 Gracie is definitely the Alpha and Lulu is fine with that. I can’t imagine what her life would be like if she was adopted my anyone but us. Not everyone would be as patient and understanding with her as we are. I guess that’s why God brought us together. She has enriched our lives and we couldn’t imagine life without her. 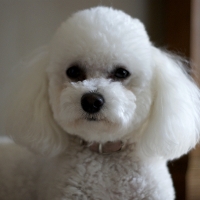 Speaking of family, this green dresser almost became part of mine.

Now it looked pretty horrible when we picked it up. It was also very heavy. But it has great lines. The top two drawers stick out further than the bottom two (intentionally). It had fantastic hardware on the bottom two drawers, but the knobs on top were missing. I found 4 different, really cool, vintage knobs that give it character.

I used Sherwin Williams paint in Paradise as the base for my chalk paint, distressed it, glazed it with brown glaze and waxed it.

It has been sitting in my dining room for a few weeks, I’m having a hard time parting with it. If I had a speck of green anywhere in my house this baby would be mine. 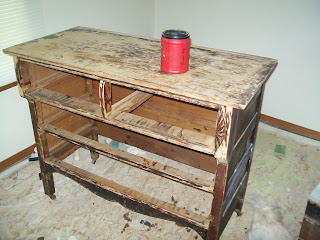 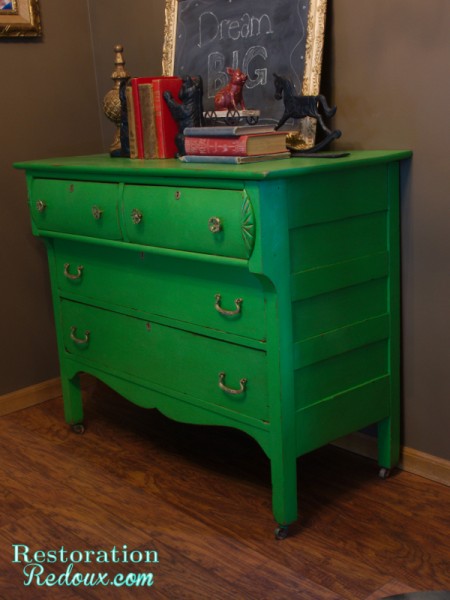