You know that little something in you that sees a junky piece of furniture and it whispers to you “grab that, it looks rough now, but we could make it into something great”?

Yeah well Topher doesn’t have that.

In fact, Topher has a little part of him that says “that is a piece of crap. Run far away from that and do not let your wife have that. It is crap and it will always be crap”.

That is why when Topher and I go on an ice cream run I sometimes forget to tell him when are running to pick up a Craigslist find first. That’s how this mammoth bookshelf down below came about. Let’s just say that Topher was less than thrilled to pick this sucker up — and not just because it weighs a ton.  (Please don’t mind that it’s upside down in the photo — that’s a long story.) First of all let me just tell you that it sat in my garage for almost a year — which was the #2 thing Topher was not happy about. It was going into my office / craft room, once it was cleared out and made over.

Since I tend to have a time management problem, nine months was about how long it took me to get around to it.

Now that the office was totally cleared out, it was time to tackle this. I started by cleaning off the 8 lbs of filth and weird sticky residue and removing the hardware.

I then used 2-3 coats of Plaster Paint in Native Stone on the entire piece. Normally, on most pieces I would then distress it, but I wanted a more modern look to this one.

I coated the whole unit in clear wax and spray painted the hardware with a metallic gold.

So what do you think? A little better than before? 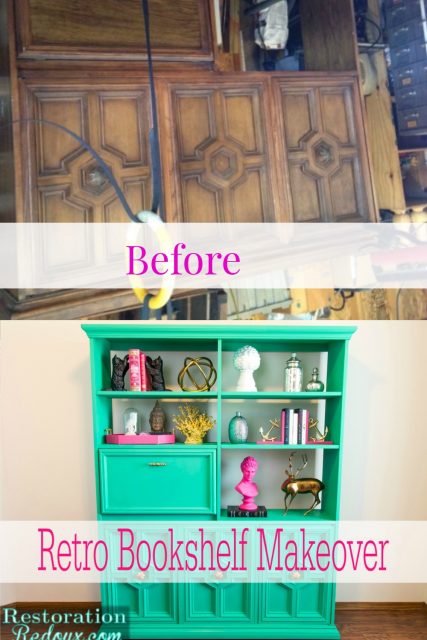 Am I the only terrible wife that drags things home that her hubby isn’t excited about? What have you brought home?